Details: Haddadi was arrested following a 5am disturbance with his girlfriend at his Memphis apartment.  Police found his girlfriend intoxicated and bleeding from the head and hand, and found Haddadi with scratches on his face and hand.  She alleged he choked and shoved her after seeing her talk to another man but he alleges the fight was prompted when he wouldn’t reciprocate her sexual advances.  Due to the conflicting accounts, both were arrested for assault. 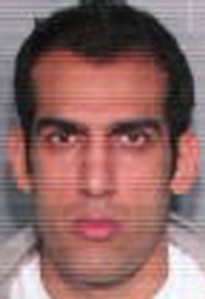